The support provided by MicroEDU

I found the support from MicroEDU to be very good from the start. At first I wasn’t sure which English university would accept and recognize which language certificate. Immediately after the first phone call, MicroEDU sent me a table listing all universities, which helped me a lot. MicroEDU also helped me a lot during my application process and filling out the forms. I was always able to reach someone and my email questions were answered really promptly. The support from MicroEDU continued to exist via e-mail even abroad and you are by no means left alone with your questions and problems.

Academic aspect of the University of Roehampton

My stay abroad at the University of Roehampton was a very enriching experience for me personally. In particular, I have found that I have tremendously improved my academic skills in terms of organizing my studies, effective learning and studying, as well as my oral and written English language skills. I benefited greatly from the British higher education system, which can offer students different framework conditions for learning and teaching compared to Germany. For example, the university library was open 24 hours a day, even on weekends. Visit existingcountries.com to get information about exchange in Dublin Ireland.

I mostly took courses that were specifically geared towards non-native speakers. The special context of these courses consisted in sensitizing the lecturers for the characteristic types of errors of non-native speakers due to a sound background knowledge of the grammatical structures of the respective, or German, language and grammar. The individual support of the lecturers in these courses, for example through additional weekly tutorials, contributed to the fact that my linguistic development could benefit significantly from this special learning environment.

The introduction of the university to the international students was very extensive. A game night and pizza meal was offered on the day of arrival. The following days were also equipped with a lot of program. For example, there was a kind of rally through London where the group was given a video and photo camera and the best photos and videos were then judged in a competition. The subsequent so-called Fresher’s Week also offers students a lot of fun and entertainment during the day, as well as many opportunities for parties in the evening. A so-called social program can also be booked for during the semester, with trips to Oxford or Wales on the weekends undertakes.

Overall, the university also pays attention to a wide range of leisure activities. Above all, the numerous sports opportunities offer a good opportunity to quickly make social contacts that can go well beyond purely sporting activities. During my stay I did kick boxing, which I didn’t know as a sport before. A very interesting, but occasionally painful experience.

The university held several meetings and dinners for the students. Here, special emphasis was placed on the cultural exchange between students of different nationalities. These meetings are a good opportunity to make contacts, especially at the beginning. Especially at the beginning of the semester you shouldn’t be shy, but take every opportunity to get to know each other, because a little initiative pays off at the end.

The university campus is located in Roehampton and is very well connected by bus to Hammersmith and then by underground to central London. However, there are also shops nearby and it can be worthwhile to take a trip to the nearby cities such as Richmond, which can also be easily reached by bus. In general, however, the cost of traveling by bus and train in the UK should not be underestimated. The purchase of a so-called Oyster Card is recommended, but the travel costs for a day to and within London quickly add up to a total of 7 pounds.

As an international student, you enjoy a number of privileges. This is how you are given preferential treatment when allocating rooms in the dormitory. I found it particularly positive that there was a balance between native speakers and non-native speakers when it came to the occupancy of the rooms and the composition of a shared apartment. So I was the only student from a German-speaking country in our community in the hallway. Two other international students from America and three British students formed my shared apartment. I got along very well with my roommates from the start and really felt very comfortable

The campus itself is very well organized. In addition to its own cafeteria, various shops, a laundry and basic medical care, there is a separate security service that guards the premises around the clock and controls the access of external persons.

One does not need to say many words about the attractiveness and attraction of a cosmopolitan city like London. Most of all, however, my British roommates gave me a deep insight into British culture and way of life. Film evenings together, trips to London and cooking together, such as on Thanksgiving, also allowed me to feel very comfortable in my small shared apartment right from the start. For its part, the University of Roehampton also contributes a lot to ensuring that, as an international student, you have very good academic and social conditions. I really enjoyed my stay and can only recommend this experience at the University of Roehampton in London to everyone. 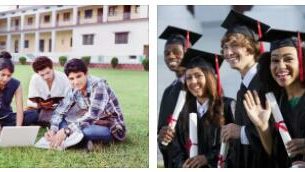