The Sweden occupies the western part of the so-called Baltic shield. Geologically it is made up of soils of the Precambrian and Paleozoic ages, of mainly crystalline and metamorphic nature, affected by the oldest of the corrugations of the primary era, the Caledonian, and subsequently peneplanated by very long periods of erosion. Modified in the Tertiary by tectonic disturbances and upheavals, in the Quaternary era the whole territory was shaped by an enormous ice cap, which compressed it to its current level. The coasts, exceptionally developed, are mainly rocky but low, minutely engraved by the river mouths and protected by numerous islets. The eastern and southern ones of Scania, shaped by the aeolian action, are enlivened by dunes, while the Öresund has a margin of fertile plains. Morphologically we can distinguish, from N to S, four natural regions: Norrland (Northern Land), Svealand (Land of the Svears), Småland and Skåne (Scania). The last two constitute Gotland (Land of the Goths). Norrland is made up of three bands that follow one another from W to E. The first is represented by the eastern side of the Scandinavian Alps, much less steep than the western one (which belongs to Norway: the border runs along the ridge). The highest peaks (Kebnekaise, 2111 m, and Sarektjåkkå, 2090 m) are found in the extreme N. The whole mountain belt is strongly engraved by glacial valleys which, when not occupied by current glaciers, are crossed by rivers (often tributaries of large lakes of morainic barrier), which descend to the sea crossing a vast plateau (average altitude around 450 m). An alluvial belt (the only one in this region favorable to human settlement) borders the coast of the Gulf of Bothnia. Proceeding to the South, there is a transition zone from Norrland to Svealand dotted with moraines often interspersed with shallow lakes and ponds rich in islands. Svealand, almost entirely covered by forest (broad-leaved, pure or mixed with conifers), but also cultivated in some places, is a vast, substantially flat region, interrupted, however, by large fractures with depressed areas, which host the major lake basins. Also crossed by numerous rivers, it is therefore rich in waters useful for industry and communications. Småland is a plateau of archaic rocks (maximum altitude 377 m), engraved by river valleys and numerous lake cavities, which from the southern shores of Lake Vättern reaches almost to the sea. At the southern end, the Scania, with its undulating relief and partly flat, is the most favored region in climatic terms, and therefore well cultivated and populated.

Given the considerable extension in latitude of the territory (about 15% is located N of the Arctic Circle, while Malmö is located S of the parallel of 56 °), the climatic differences are considerable. The average annual temperature ranges from 9 ° C to −1 ° C. Summers are cool: the average temperature of the hottest month (July) varies between 11 ° C in the N and 19 ° C in Sweden In the coldest month (January), in the southern Sweden, affected by the mitigating action of the Current in the Gulf, the average temperature is 0 ° C, while in Norrland it is −16 ° C. The influence of the Atlantic is also felt on rainfall, which allows tree vegetation and agriculture itself to go further north than in any other country on the globe. Much of the precipitation falls in the form of snow, which on average remains on the ground for 8 months in the extreme N and for less than a month in Scania. Precipitation, abundant on the Alpine ridge (1500 mm per year), decreases as it proceeds towards E and N (between 500 and 800 mm per year). For Sweden geography, please check franciscogardening.com.

The rivers have a great importance in the life of the country, especially in Norrland, both for the floating of the timber, and for the use of the hydraulic power of the jumps and rapids. The regime is irregular due to the prolonged snow cover, but almost all Swedish rivers originate, at least in their middle course, from a lake that regulates their flow. Commonly there are two maximums: in spring or early summer, due to the melting of the snow; in autumn, after maximum rainfall. Thousands are the lakes and ponds, which altogether occupy 8% of the territory. The main ones, all in Svealand, are: Mälaren (1140 km2), Vättern (1912 km2) and Vänern (5585 km2, the largest in Scandinavia). Fed by various rivers, it has as its outlet the only large river in the southern Sweden, the Göta älv, which flows into the Kattegat.

With regard to the flora, after the alpine belt (which, except for the cacuminal areas covered with ice, is characterized by dwarf birches and descends from the upper margin of mosses and lichens up to 500 m N and 900 m SW), they can be identified, from N to the South, the tundra, the taiga (coniferous forest) and the deciduous forest. The coniferous forest (pines, firs and birches) covers almost all of the northern Sweden and the hills of Småland; to the North it fades into the forest-tundra (tundra dotted with tufts of conifers and birches) and then into the actual tundra; in Norrland it covers almost the whole territory with a very thick mantle, interrupted only by peat bogs, ponds and marshes. At the southern edge of the taiga there is a large strip of mixed forest of conifers and broad-leaved trees, which in the southern Sweden gives way to the pure broad-leaved forest, partly destroyed to obtain agricultural areas or pastures, as well as for urban and industrial settlements. ● Once typical examples of Scandinavian fauna, the bear and the lynx, protected by law, have now taken refuge in the thick of the forests of the North, like the wolf (which however is almost extinct). Moose (present throughout the central-northern area), badgers, foxes, otters and roe deer (the latter in the central-southern area) are very common. In the extreme N there are also herds of domesticated reindeer. There are numerous bird species that nest in the country, but most migrate as winter approaches. The rivers and lakes are populated by salmon, trout, pike and, in the S, by shrimps. 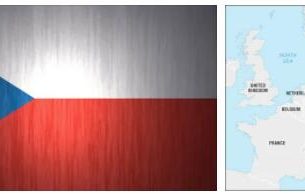 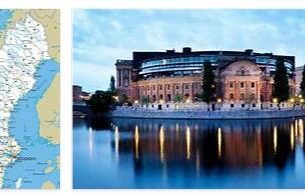 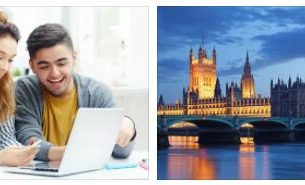