Since I really wanted to go to California during my year abroad and MicroEDU has various universities in the Los Angeles area in its program, I decided to go with this organization. Even though I live in Switzerland, the communication was totally uncomplicated and I was always supported in the preparation. I was always able to ask questions, be it by email or phone. When I decided on the CSUF, the application went flawlessly. I only had to fill out a few forms and then it was time to wait. After a few weeks I got the acceptance from the university and also from the University Village, where I lived throughout the year. I then had to make a list of ten courses that I would like to take. Since I had not yet started my studies in Switzerland. Visit jibin123.com to get information about economics and education in Singapore.

I lived in the UV all year long. It has its own cafeteria where you could eat twice a day, five days a week. The meal prices were included in the rent. The complex has its own pool and at the beginning of the semester there are small events for the new tenants. I had my own room with an attached bathroom and toilet. The kitchen and living room are shared with 2 flatmates. I had the largest room, but the others are also big enough. The roommates are assigned. You had to organize the Internet yourself, as what was made available wasn’t enough and sometimes couldn’t even be received. In the fall semester, most of the residents were either from Germany or South Korea. So it was pretty hard to escape the German language. The Fullerton College football team stayed there too, which was great entertainment. In the spring semester, the UV was then much emptier and quieter. There were fewer Germans, although there were still many there (of course they were super nice too!).

The university has around 38,000 students, most of whom do not live on campus. You have to be aware that the university is a “commuter school”. I heard there are a lot of internationals in the business courses. In my courses, however, I was almost always the only foreigner. Of course, this helps a lot if you want to get to know Americans and really want to speak a lot of English. I’ve made some of my best friends in my classes.
In the fall semester I took 4 courses:
SOCI 101: Intro to Sociology with Mohammed Abdel Haq
RTVF 220: TV Studio Production with Shelley Jenkins
RTVF 361: American TV with Shelley Jenkins (my favorite course this semester)
CRJU 300: Intro to Criminal Justice with Bill Van Cleve

In the first semester I only got the RTVF 220 course directly and had to crash the others. But that wasn’t a problem and I got all the courses I wanted. In the second semester I didn’t get any direct and had to crash all of them. By Tuesday of the first week I even had 5 courses, and I had to drop one again. So you can also sit in several, get signatures and then decide afterwards which one you like best.

In the spring
semester I took 4 courses again: SOCI 411: Criminology with Nathan Horn
CRJU 345: Corrections with Kevin Meehan
CRJU 455: Gangs in America with Nick Guskos (here I was able to go on a field trip to LA forensic medicine)
PSYC 101: Intro to Psychology with Dr. Sue Sy

I enjoyed all of my courses very much, some with more and the other with less effort. During the semester you have midterms, finals and other exams, as well as some papers that have to be written.

I spent my free time in a rather untypical way for internationals. I joined Sorority Sigma Kappa, which was actually the best decision of the year. I met a lot of great people and had the opportunity to develop friendships with Americans. Student fraternities have a long history in the United States and are part of American university life. I’ve done a lot with my sisters and have developed friendships for life. I can only recommend joining a student association and if anyone has any questions, please feel free to write to me. To be a member of a Sorority is of course associated with additional costs, but worth every penny! BTW Kevin Costner was a Delta Chi at CSUF. If anyone comes to Sigma Kappa this fall semester,

In addition to Sigma Kappa, I also did a lot with friends from the UV. I got to know people from all over the world, which was very interesting. I’m a huge TV series fan and have built this into my free time. (See Roadtrip 2) For example, I’ve seen a lot of TV tapings, done many LA road trips and was an extra at TED 2.

I’ve also traveled quite a bit. But especially in the second semester. I went to San Francisco, was in Las Vegas and San Diego and also did two big road trips. The first went from LA to Utah to Zion National Park, then to Arizona to Antelope Canyon and finally to the Grand Canyon. I can only recommend the Angel’s Landing hike in Zion.
For the second road trip, I flew to Atlanta and then continued by car. We went first to Covington, GA (where the Vampire Diaries are filmed), then to Athens, GA to the UGA. Next we are to Charleston, SC and Wilmington, NC (where One Tree Hill and a lot more was filmed). Finally we went to Nashville (Country Music City), which was my favorite stop. The Grand Ole Opry is not to be missed! The Americans are really very accommodating, hospitable and simply great everywhere!

I have to say that I bought a car at the beginning of the first semester because I was too young to rent one. A lot would not have been possible without a car and I advise everyone to get one.

This year was by far one of the best and I would recommend anyone doing a semester or year abroad!
And thanks again to MicroEDU and especially to Anja Heinz for the great support. 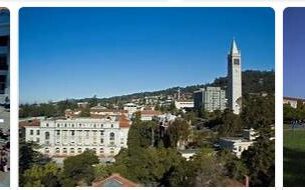