Ireland Island is at the extreme tip of Bermuda’s “fishhook”. The wreckage of sunken ships is exhibited here in the Maritime Museum.
The neoclassical buildings of the Royal Navy shipyard are also interesting.

The former capital of St. George’s at the eastern end of the chain of islands was founded in 1612. The old face of the city and its historic landmarks have been restored through extensive restoration work. Visit the corner of Duke of Clarence Street and Featherhead Alley for a working model of a 17th-century printing press. The Confederate Museum was the quarters of Confederate officers during the American Civil War. Other attractions include the Stock & Pillory and a replica of the Deliverance, one of Bermuda’s first ships.
Fort Scaur in Somerset is an ideal picnic spot and offers beautiful views of picturesque Ely’s Harbour. Gates Fort was built in 1615. Nearby is Fort St. Catherine, dating from 1622, the island’s oldest and most fascinating fortification.

Hamilton is the capital of the colony. The Senate meets in the Cabinet Building between Parliament Street and Court Street. The Sessions House – this is where the House of Representatives meets – can be visited. Also worth seeing is the 19th-century cathedral on Church Street. Front Street, the main shopping street, runs from Albouy’s Point at the Ferry Dock past the Bermuda Yacht Club and further east ends at King Street. Perot’s Post Office is on Queen Street. The country’s first postage stamp, the Perot stamp, was printed here from 1818 to 1862. Ferry tours of the harbor or trips across the Great Sound to Somerset village are available. Built in the 19th centuryFort Hamilton has been fully restored and is well worth a visit for its massive battlements, massive cannons and underground tunnels.
Excursions:
The Bermuda Aquarium, Museum and Zoo, accessible by bus from Hamilton, offers an insight into Bermuda’s history and environment.

Some hotels have live shows, nightclubs or discos, or host barbecues and dance evenings. The musical performances are a mix of calypso, Latin music and steel bands.

All hotels in Bermuda are of a high standard. The top hotels usually offer shops, restaurants, taxi ranks, beauty and wellness salons and an extensive entertainment programme. For more information, contact the Bermuda Hotel Association, 61 King Street, 19 Hamilton MH. (Tel: 295 21 27. Internet: http://www.experiencebermuda.com/). Categories: Most hotels offer Modified American Plan (MAP): Bed, breakfast and dinner, with afternoon tea in some hotels, or Bermuda Plan (BP): Bed and Breakfast. About 7% of hotels are large and luxurious. About 16% are smaller, with fewer than 150 rooms. They are usually cheaper than self catering,

There are no campsites.

Manners: Bermuda manners and customs are very similar to British ones. It is also customary to greet strangers on the street. Dress code: Casual attire is acceptable, but bathing suits are required on the beach. In many hotels and restaurants, a jacket and tie is expected in the evening, so it is advisable to inquire in advance. Non-smoking zones are marked accordingly. Tipping: 15% is reasonable. In some hotels and restaurants, fixed amounts are added to the bill as a tip rate.

Subtropical with no rainy season and moderate temperatures. The Gulf Stream flows between Bermuda and the North American continent. Change of seasons between mid-November and mid-December and between late March and April. Rain showers are sometimes quite heavy, but rarely occur during the day. Summer lasts from May to mid-November. The hottest months are July, August and September.
Online weather information for Bermuda: www.weather.bm 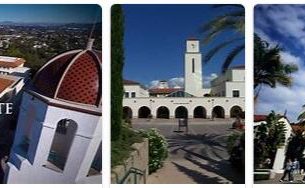